David Bryant’s roots in the blues run deep. His grandfather, Curley Weaver, was a widely appreciated Piedmont-style blues guitarist who did his first recordings for Columbia Records in 1928. His mother, Cora Mae Bryant, was a longtime partner artist with Music Maker. She had learned how to play the blues at the feet of her father and with legendary bluesmen like Blind Willie McTell and Buddy Moss, who lived nearby her home in Oxford, Georgia.

David lived with and cared for his mother until her death in 2008 when he was 49. David is a Buddha-like figure. Every morning, he sweeps his dirt yard with a straw broom, creating elaborate patterns that look as if they came from a Japanese Zen garden. On the inside, his home is decorated like a museum.

As a visual artist, David creates intricate and beautiful collages of beads and buttons, and he doesn’t use just any old trinkets he finds. His materials come from people he knew who have passed away, and his work helps to keep their spirits alive.

“I had become close to David when his mother fell ill. David stayed home and took care of her while Music Maker sent monthly monies to assist. One time in 1997 I stopped by with Mr. Frank Edwards to visit Cora. I fell asleep on the couch and David walked in and picked up my guitar and played some of the most primitive pure guitar I’ve ever heard." Tim Duffy

Take a look at many of the most revered guitar players and you will see them play complicated licks. It is as if their music says, “Look at me. I’m the greatest.”

But look at David Bryant, and he’s simply thumping on his guitar, relying on his tunings to create distinct sounds. He plays to express the message of a song, to create joy in the room. 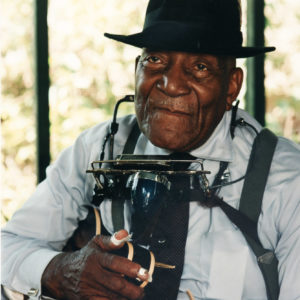