Though he often sings “Everyday I Have the Blues” with his own band, the Telluride Blues & Brews festival will mark the first pure blues gig longtime James Brown & the JB’s bassist Fred Thomas has ever played.

But Thomas is not at all worried.

“Just apply your own soul, man, the spirit, and you got blues,” he says after the Revue gathered near Atlanta, Georgia, for a rehearsal in August. “I’m a funk person, man. I play some jazz, you know, old school jazz, ‘Girl from Ipanema,’ ‘Watermelon Man,’ stuff like that. I play all that kind of stuff, but I never really played a whole blues gig. 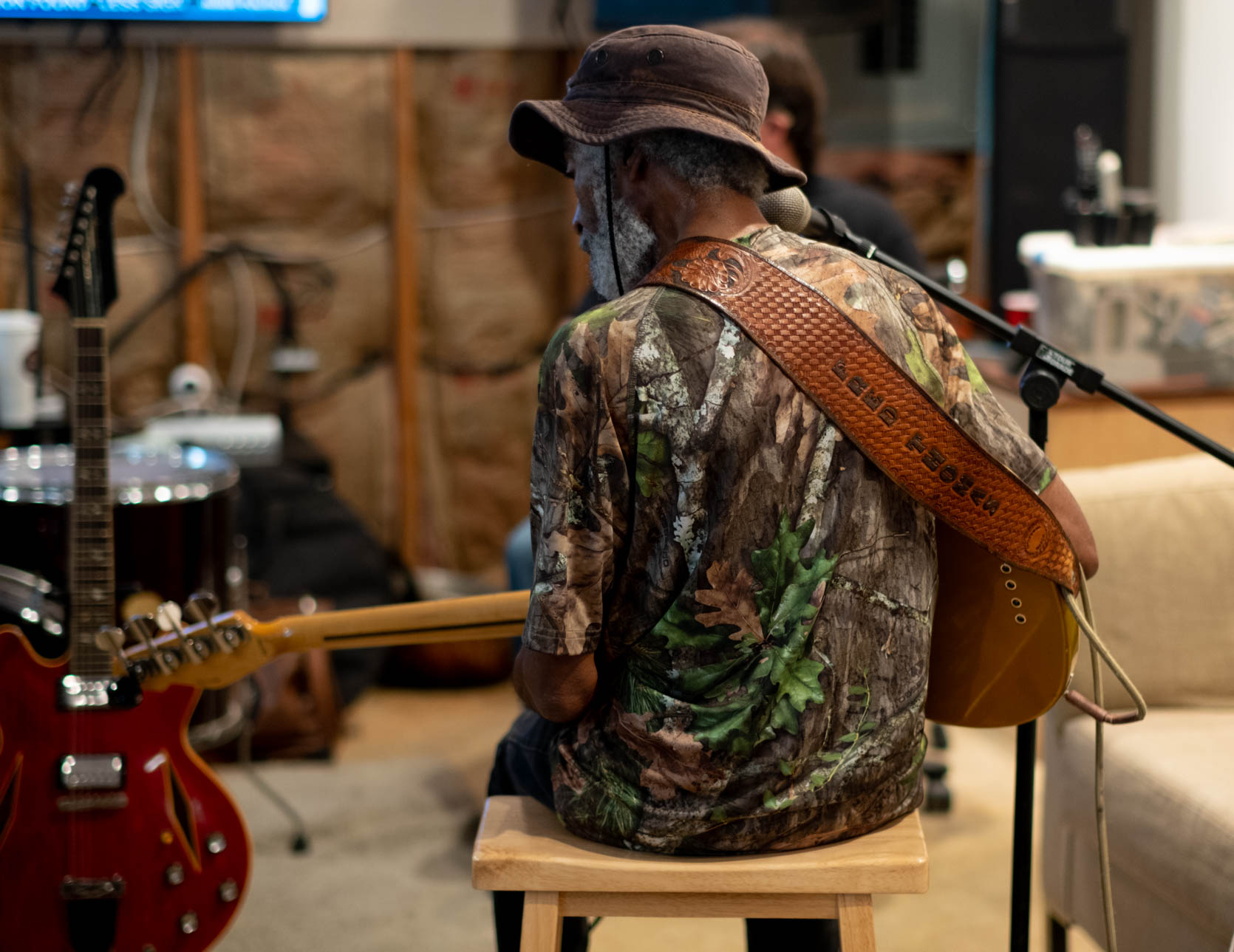 Thomas will have no trouble with it, though, when the Revue appears in Telluride, Colorado, on September 17-19. This is the man who played off and on with James Brown for 35 years. This is the man to whom Brown would sing bass lines that Thomas would later solidify, such as on “Get on the Good Foot” and other seminal funk tracks recorded in Brown’s creative foment of 1971-74. This is the man who sang “I’ve Been Loving You Too Long” at Brown’s funeral.

This is one of the men who originated funk music.

Brown first hired Thomas when he walked into Small’s Paradise in Harlem in 1971. James came into the bar and the crowd demanded that he sit in, but he had doubts about whether the band — which included Thomas — could keep up with him. Still, Brown agreed. By the time he walked out, he had told his manager to hire the whole band to back him.

“He said we killed it!” Thomas recalls. “We had a good unit, ever since we started playing with my band, a tight unit from ’66 on. We had a special thing, you know what I mean.”

“Mr. Brown says he wants this, he wants that, I just put my thing on it. My thing was, whatever he gave me to play, I found a way to make it groove." Fred Thomas

To illustrate how the JB’s worked with Brown, Thomas recalls the making of “Get on the Good Foot.”

“Mr. Brown says he wants this, he wants that, I just put my thing on it. My thing was, whatever he gave me to play, I found a way to make it groove,” Thomas says. “Sometime I did my own line, overhaul it. Me and ‘Cheese’ [rhythm guitarist Hearlon Martin], we knew how to make it groove between the two of us. One of the tunes I do [with my own band], I do ‘Make It Funky,’ it’s just a funky tune. It feels good. The line on the ‘Good Foot’ is always like, wow, what a bass line. I didn’t think about it at the time I recorded that song. I figured out the way I made it groove, how I applied it. There’s an accent after the downbeat. That’s what makes the song work, syncopated.”

The festival crowd in Telluride will get the chance to hear Thomas sing — something that never happened when he was on stage with Brown. Thomas remembers a time when another JB’s member told Brown that Thomas could sing. Thomas says Brown replied, “Fred Thomas sing? I know Fred Thomas sing. I sing. I need a bass player. I don’t need him to sing. I’m the singer. I just need a beat.”

A young Fred Thomas backs James Brown as they perform "Get on the Good Foot" on "Soul Train."

Thomas recently moved back to his home state of Georgia after playing all over the world.

“Sao Paulo was fucking awesome,” he recalls. “I love Japan: Japan was really different. I went to Russia a few times, China, Australia.” But his favorite city in the world is the one he called home for five and a half decades and still returns to periodically, New York.

After James Brown’s passing in 2006, Fred was determined to get a band together.

“It was a bitch trying to get to the group I got now,” he says, exasperated at the memory. He’s got an awe-inspiring and tight band in Brooklyn these days, consisting of both young players and veterans he’s known for decades. After years with Brown as the boss, he relishes the opportunity to be a bandleader.

“My call is my demand,” Thomas says. “I need you all to play for me. I got to do the singing, playing, talking, moving, directing.” His current band includes Jimmy Hill, who shared bandstands with Wilson Pickett, the Intruders, the Shirelles, and the Marvelettes. Trumpeter and vocalist Tyrone Cox has played with Pickett, Ben E. King, and the Isley Brothers. Famed drummer Daru Jones band judged the band good enough for him to sit in at a recent show.

Of his current Brooklyn guitar player and close friend Gabriel Caplan, whom he met when they both backed Naomi Shelton & the Gospel Queens, Thomas says, “I showed him to stroke it and accent it.” Thomas first played with Shelton, who passed away in February, 2021, back in the 1960s and more recently in the ’10s. He adored her.

“She was doing blues,” he remembers of when they first met, his voice conveying his excitement. “She had a heavy voice. If she had a show, I was there. After all those years playing with Brown, I came back to her, but she was doing gospel now. She’s fucking amazing, man. She had such style, just chilling, she could be funky with it. She was strong, man.”

Fred Thomas performs "Pass the Peas" with his own band in Brooklyn.

Just this year, Thomas has moved back near his original home of Grovetown, outside Augusta, Georgia. This was the place of his formative musical experiences, including growing up with the blues.

“Around my family, we had an old guitar. Played blues, John Lee Hooker, Howlin’ Wolf songs, that was that,” he recalls. “When I started trying to play, I started playing the blues. We’d try to do little gigs down there in the woods, little juke joints in the woods. That was the beginning of me really trying to play.”

Thomas also listened to soul music and rhythm and blues on the radio, especially at night when signals from places like Nashville were clearer. Though known as a bass master, he got his start on guitar and vocals, singing with a group in high school. His young band came in second in what Fred calls a “Sing Off” in Georgia. He says, “I sung every Friday evening in high school.” After a brief stop in Miami, Florida, in 1965, he moved to Brooklyn, where his cousin-in-law lived — and taught Thomas his first bass licks. The first song he learned was “Under the Boardwalk.” The duo formed a group with Fred on vocals.

Thomas plays with his thumb, giving him a powerful tone, unusual among bassists, but that’s how it came most naturally to him as he was learning. The technique, he says, allows him to “play intricate chords. I can hit it and tap it, or I can prolong it and the chord sounds better.”

Underneath everything Fred Thomas says about music is the joy he takes from playing in a band, interacting with other musicians to find a common groove. And his personality is perfect for the role of bandleader. I got to experience this firsthand a couple of times in 2018, when I sat in with Thomas after midnight at Freddy’s Bar in Brooklyn, playing the Jimmy Rogers classic “That’s All Right,” which he told me was the kind of music he played growing up in the woods of Georgia. When I later played B.B. King’s “Three O’Clock Blues” with him, he embraced me warmly and said, “Fucking awesome.” He is gregarious and treats younger musicians warmly and supportively — the hallmarks of a great bandleader.

But right now, the band experience Thomas is most excited about is the upcoming Telluride performance, because it will reunite him with fellow JB, guitar virtuoso and fellow Georgian Robert Lee Coleman. The two men haven’t played a gig together since the mid-2000s.

Besides Fred joining the Music Maker Blues Revue In Telluride, Fred Thomas & His JB’s have several upcoming gigs in Brooklyn.