When Charles Burroughs was only 8 years old in Tampa, Florida, he was picked on by his peers because of a speech impediment and chose not to speak at all to avoid the incessant bullying. Over a much needed summer break, Charles went to visit his great-grandfather in Plains, Georgia, a musician who simultaneously blew harp and strummed a handmade guitar formed from an orange crate and broomsticks. That summer, Charles’ great-grandfather gave him a harmonica and told him, “I want you to take this harmonica and tell the world how you feel.”

If you witness what Charles describes as his “down in the gutter, back alley, storytelling blues” today, you’ll know he has learned to use the harmonica to tell the world how he feels. In the 65 years since he first picked up the instrument, he has more than earned his moniker, Sugar Harp.

Sugar Harp’s music is all his own, and in his songs you can feel the places he’s been. In 1969, Sugar was hanging with Jimi Hendrix at the Fillmore East and hitched a ride to Woodstock on a whim. The following year he was drafted into the Air Force and began serving in the 56th Fighter Wing in Vietnam. His experiences from New York to Vietnam, the partying and the struggling, shape Sugar’s character and his music.

But a year and a half ago, new Music Maker partner artist Sugar Harp found himself sugarless and harpless. On November 26, 2019, driving his van — packed with all of his treasured belongings, including his harmonicas — through his current hometown of Birmingham, Alabama, Sugar Harp noticed a driver in another vehicle motioning to him frantically. Sugar’s van was becoming engulfed in flames. Moments later, Sugar acted on instinct, jumping out of the moving vehicle and rolling on the ground to extinguish the fire that had spread and caught onto his jacket. Sugar was completely distraught, and soon thereafter, when the pandemic hit, he worried he might be done playing the harmonica for good.

But a year and a half later, with the help of a few friends, Sugar had a new ride, a set of harmonicas, and an optimistic attitude. He joined Music Maker in Birmingham in May to play a few songs and is now recording a new album in Huntsville, Alabama, with three local players: Music Maker Blues Revue bandleader, producer and drummer Ardie Dean, guitarist Microwave Dave and bass player T. Bone Burnett. Upon first introductions back in May, Sugar seemed like a wise, reserved, wordly professor. He came prepared to record wearing a suit and tie and — as Music Maker Executive Director Tim Duffy described it — “a dreadlock down to his belly button in the front and down to his big toe in the back.”

"The guy told me not to sing those sexy songs ’cause you all are church people. And he said, ‘Yeah, but we ain’t in church today.’” Sugar Harp

Despite his quiet demeanor, once you get Sugar started talking or singing, his passion and joy for the music is clear. Sugar has a way with words in his songs: His original lyrics are a little raunchy, full of innuendo but always clever. He guides listeners to draw their own conclusions, never going outright X-rated, just keeping his shows technically family-friendly and keeping the audience cracking up.

Sugar recalls stepping on stage for a gig where he had been directed not to play his “sexy songs.”

“The guitar player, a deacon in a church, said, ‘Sugar, you gonna play us that sexy song?’” Sugar recalls. “He says, ‘My wife loves it. Sing one of those sexy songs.’ And I said, ‘The guy told me not to sing those sexy songs ’cause you all are church people.’ And he said, ‘Yeah, but we ain’t in church today.’”

Play What You Feel

Though Sugar Harp’s music is lighthearted, he can get serious quickly, especially when sharing his take on what’s required to play the blues. Sugar believes there is something missing in many of the talented and successful players out there today who are considered blues musicians.

“They always go beyond blues,” he says. “If you look at the old blues artists, them guys couldn’t even read. They played by ear, they didn’t know anything about no seventh chords, about no wheel of fifths. All they had to do was pick up a guitar and sing about how they feel.” 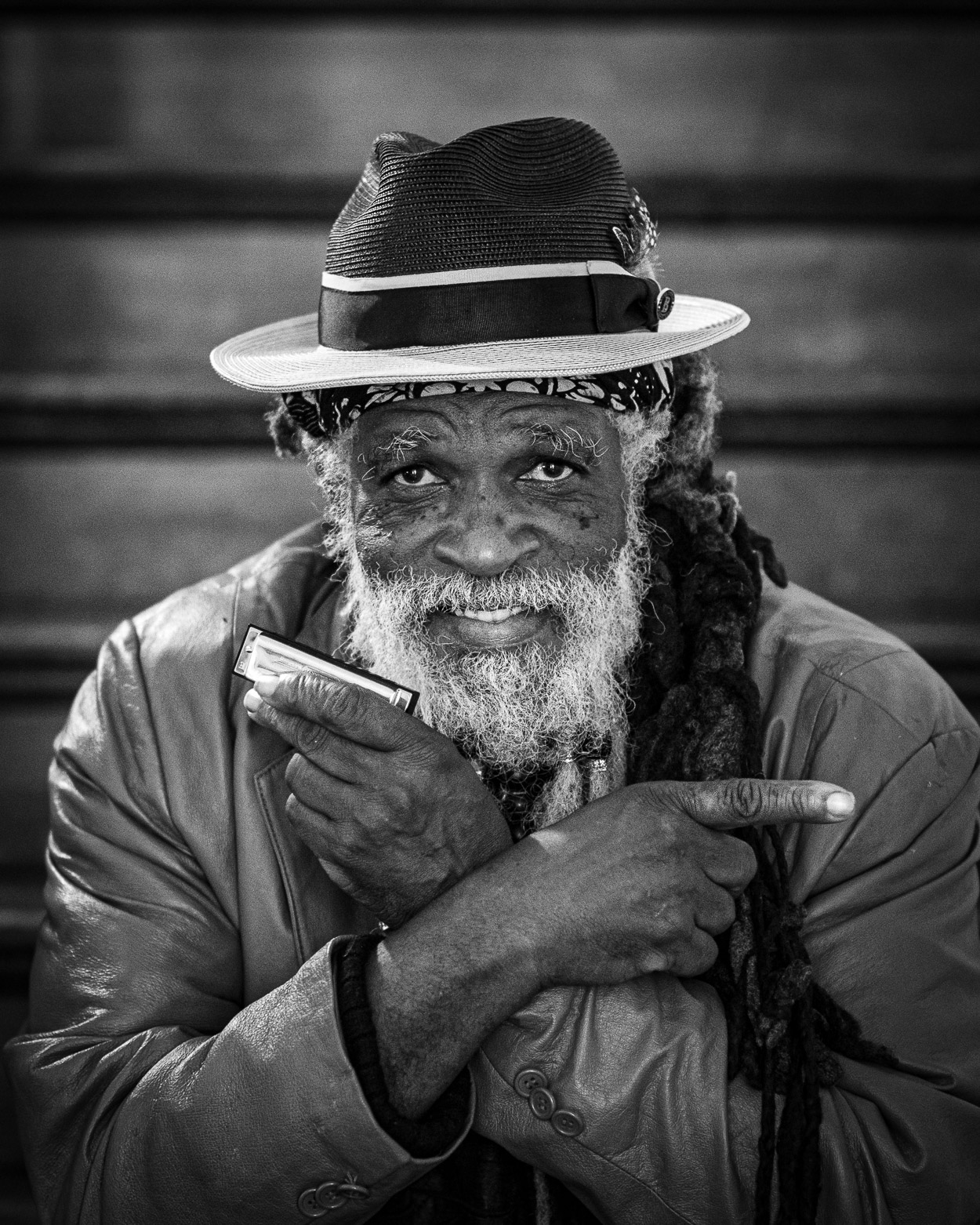 Sugar describes the balance between technically playing in the blues tradition and playing with emotion: “When I play with guys, I always tell them ‘Hey, play the progressions, but don’t stick to the lines, because it won’t sound right. You got to play what you feel.’”

The decades that Sugar has spent playing the harmonica give him a sense of pride and a desire to protect the heart and soul of the music. But he still welcomes anyone wanting to venture into the blues. “Absolutely, I think white guys can be bluesmen,” he says. “But play the blues — not rock n’ roll, or acid rock or punk rock or whatever it is.”

Sugar recalls a young musician who was lauded as a prodigy. He was technically talented, but, to Sugar’s ears, he lacked the life experience and the emotion that makes great blues music.

“His parents bought him Strats and Les Pauls, $5,000 guitars, when he was 9 and 10 years old,” Sugar says. “He never suffered; he don’t know what suffering is. He’s mimicking what he’s hearing, [but] nothing he does is original.”

Sugar Harp’s music is all his own, and in his songs you can feel the places he’s been. In 1969, Sugar was hanging with Jimi Hendrix at the Fillmore East and hitched a ride to Woodstock on a whim. The following year he was drafted into the Air Force and began serving in the 56th Fighter Wing in Vietnam. His experiences from New York to Vietnam, the partying and the struggling, shape Sugar’s character and his music.

A New Generation of Harps?

Sugar Harp can’t change the landscape of all of the artists out there playing the blues, but he hopes he can make an impression on some. None of Sugar’s three sons picked up the harmonica, though it was around them and available. Sugar thinks they were intimidated. But maybe the instrument will skip a generation, and one of Sugar’s five grandkids will sit on his lap and learn from him the way he did from his great-grandfather.

“I bring harmonicas every time I go around and they mess around on it,” he says. “I don’t try to teach them anything to make them throw it away. ’Cause you know, you try to teach them something and the kid can’t play it. What do they do? They throw it away. So I just let them experiment on their own until they’re old enough to understand the instrument.”

Sugar contrasts his approach to introducing the harmonica to his grandkids to young athletes with overbearing parents. He uses golfer Tiger Woods as an example.

“This is not what he wanted to be,” Sugar says. “After his daddy died, when he didn’t have anyone tell him what to do, that’s when he lost control and started womanizing. It wasn’t his choice, it was chosen for him. And the fanfare isn’t all that good. When you go home, you’re alone and you have to live with yourself.”