“Life always throws something at you,” says Shelton Powe, who’s parried his share of curveballs. “That’s a lot of what the blues is about.” And while his blues is rooted in tradition, it continues to evolve. “The more I play,” he notes, “the more different sounds I hear in my head.”

Born in Charlotte, North Carolina, in 1957, where he was raised in a talented family of multi-instrumentalists and singers, Powe grew up listening to a live soundtrack of Piedmont finger-picking blues and gospel. But it wasn’t until much later, in the late ‘80s, that he started hearing the sounds of his childhood in his head. That’s when he finally picked up the guitar, in tribute to his late mother, and started learning the old songs that were already in his blood.

“I was just fooling around with it at first,” recalls Powe. Then, in 1990, he moved to Atlanta, where he began playing in coffee houses and clubs like the Northside Tavern, and crossed paths with Mr. Frank Edwards, Cora Mae Bryant, Cootie Stark, Mudcat and other Atlanta-based Music Maker artists. “I liked the way they played, with a lot of bass lines and runs,” says Powe, who quickly absorbed what he heard. “A lot of my music has that thumping bass.”

Powe initially hit Tim Duffy’s radar in 1997, when the Music Maker founder was in Atlanta shooting a documentary. “He was always approaching me [to record], but I didn’t pay much attention,” recalls Powe. Then, in 2003, his musical career came to an abrupt halt when he moved back to North Carolina to deal with family deaths and illnesses. For nearly a decade, he basically stopped playing “because I got a job that had me traveling constantly.” 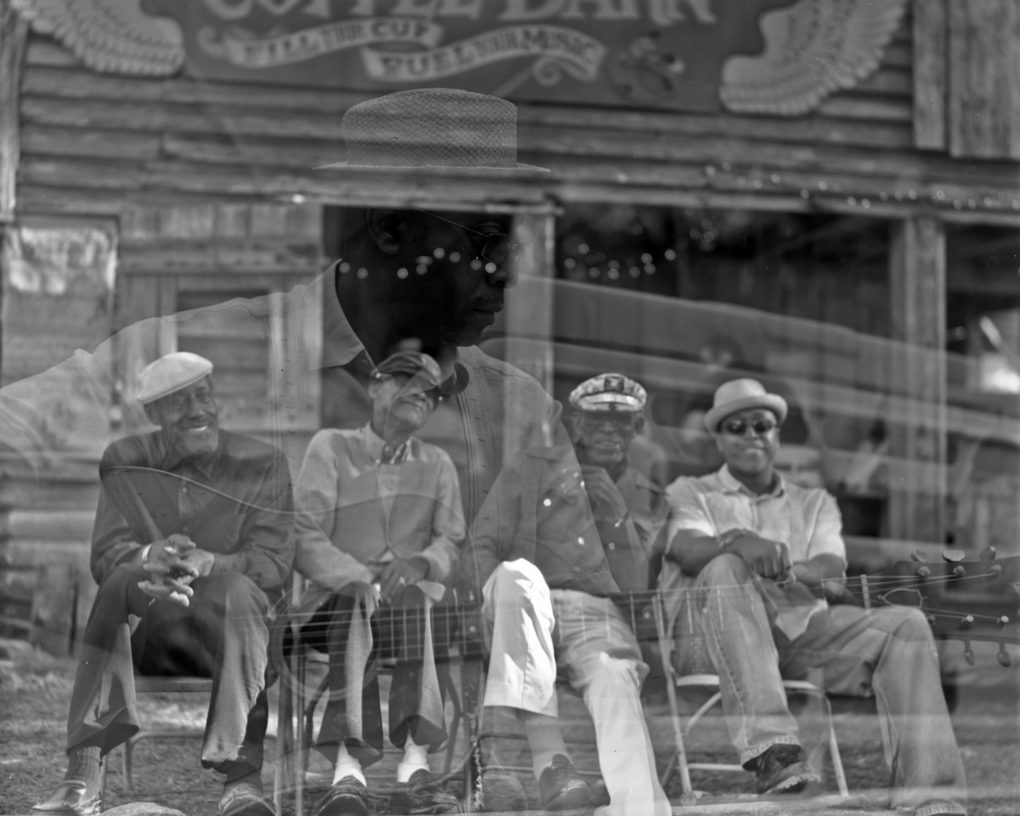 But Duffy, as always, was persistent, and eventually succeeded. After tracking Powe down in Indian Hill, NC, he recorded and released Powe’s debut Music Maker album, Carolina Blues and Gospel,  in 2012, just before Powe moved back permanently to Atlanta in 2013.

“I had just started playing again when Tim recorded that,” recalls Powe. “So I was real rusty.” Rusty or not, his first album drank deep from the Piedmont wellspring and was a fine addition to the Music Maker catalog. But Powe is much more excited about his new release, because he has something far more original to say. Seven of the fourteen tracks are his own compositions, while the rest put a new spin on traditional blues and gospel.

During a lively conversation via Zoom, where Powe spoke to me in New Orleans from his home in Atlanta, we discussed the stories behind the songs, and he revealed a few surprises that eluded me on first listen. We also talked about his lifelong obsession with trains, his day-job as a traveling hospital-equipment repairman and both of our recent close encounters with cancer. Because, like Powe says: “Life always throws something at you.” 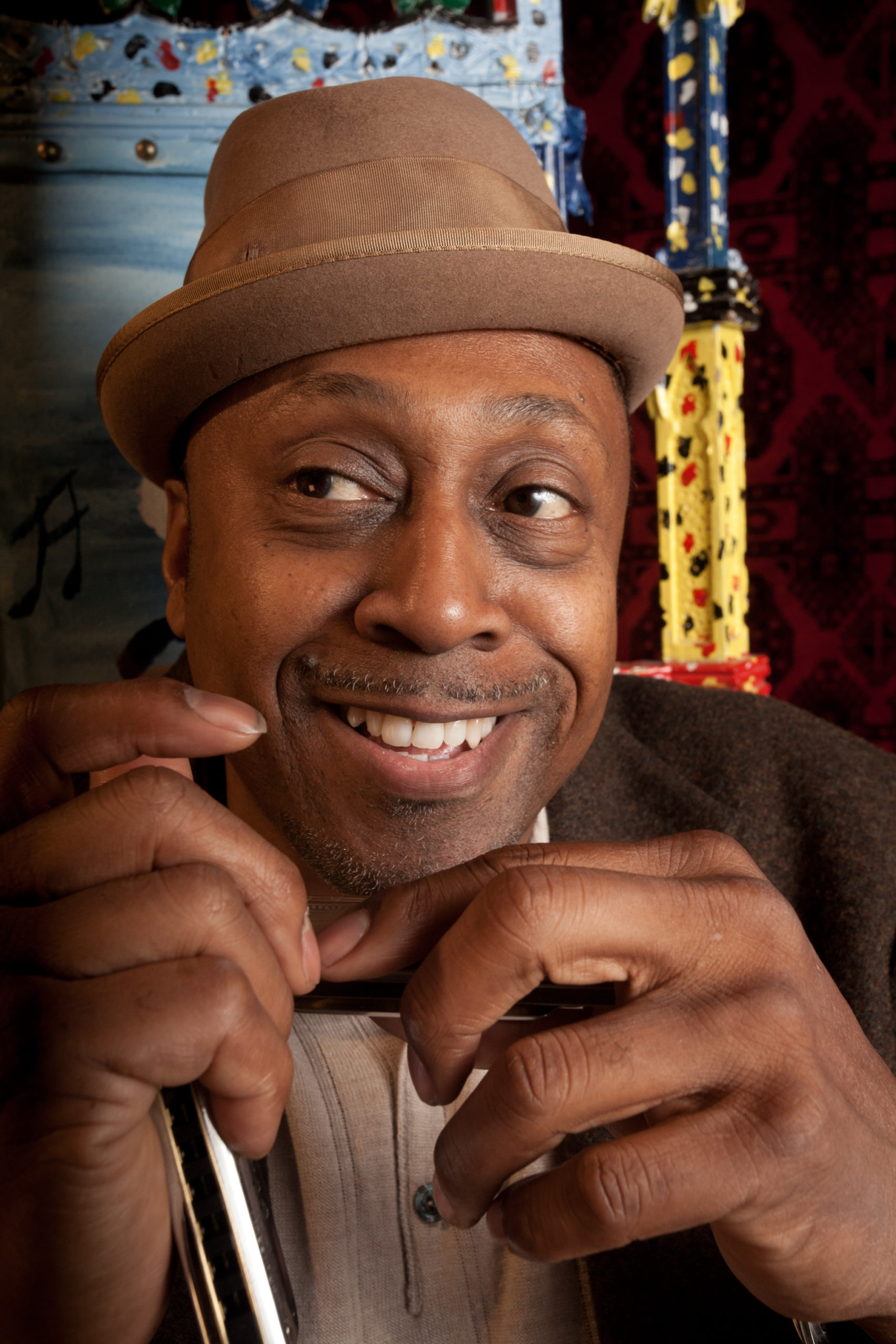 Shelton Powe with his mouth harp. Photo by Tim Duffy.

How did you choose the songs you wanted to include on the new album?

Well, believe it or not, a lot of them are my own compositions. “Amtrak Train” is mine. And another one that’s almost exactly like that, “What You Gonna Do.” That one, Tim [Duffy] plays guitar on. I told Tim, every time I play what’s on the CD, I improvise and change it. We actually had three takes on that. The last one was: “I laid my head on the cold railroad track/saw the train coming so I changed my mind and snatched it back.”

But you never smashed it, which is what I first thought you said. Good! That would have been a terrible way to go, having your head run over by a train! [laughs] There’s a whole train motif running throughout the entire album.

I love trains, old freight trains and cattle trains, I used to see them all the time, even in Charlotte. I have a Facebook page dedicated to Vintage Train Songs and Stuff, with a lot of old train pictures and old train songs. And it’s not just blues. It’s like Johnny Cash stuff, and Jimmy Rogers singing cowboy. It’s not like it used to be, with those old observation cars. But “I’d rather take a train than take an airplane/cause you could see the countryside.” [laughs]

“Salt Peanuts” was the first song I heard, because I watched the video on the Music Maker website, and it’s one of my favorites. Are you a peanut guy?

Yeah, I am. [laughs] They used to sell ’em two bags for a dollar at the grocery store and sometimes they’d boil ‘em. We also used to buy them raw and put ‘em in the oven or on a fire and cook ’em like that. They taste real good. “Salt Peanuts” is my own composition, but I used to listen to a lot of Dizzy Gillespie and that was the name of one of his famous songs.

I also love “Shake ‘Em On Down,” about the girl from Cabbagetown.

Yes, it’s got that weird-sounding guitar. That’s one of Freeman Vines’ [Hanging Tree] guitars. Tim thought it would be cool for me to play it on that. A lot of other guys do “Shake ‘Em On Down,” but the one on the record is my own. It’s got a little funk sound to it, this beat that keeps going boom, boom, boom and keeps you tapping your feet. That was my idea.

What about “She Don’t Care About Me (But She Loves That Cocaine)”? Did you actually have a woman who was a big coke addict and pawned every gift you ever gave her?

Yes. And I gave her everything that’s in that song. Except for the car! [laughs]

You also do a few beautiful sacred songs, like “Give Me Two Wings.”

That’s a twist on a church song asking God to give them wings. The slaves wanted wings so they could get away from the plantation, from being treated bad. I sing that song almost like a prayer.

It made me think of “I’ll Fly Away,” which they play at second-line jazz funerals in New Orleans. “Where Shall I Be” also reminds me of New Orleans because it has a very percussive beat. Did you have a backup singer on that one? It sure sounds like you did.

No. [laughs] What you’re hearing is my slide. I’m so glad you got that. Because I was trying to give the impression somebody was singing with me behind me.

And it worked! Wow, that’s actually pretty incredible. At the end of the album, you come back to the train motif with the traditional song “Railroad Bill.” Do you get to travel much these days?

I used to. I would travel all over Mississippi, South Carolina and Alabama, repairing hospital equipment. Sterilizers, surgical instruments, stuff like that. I’m still doing it, but I’m slowing down now. Because my body has changed. 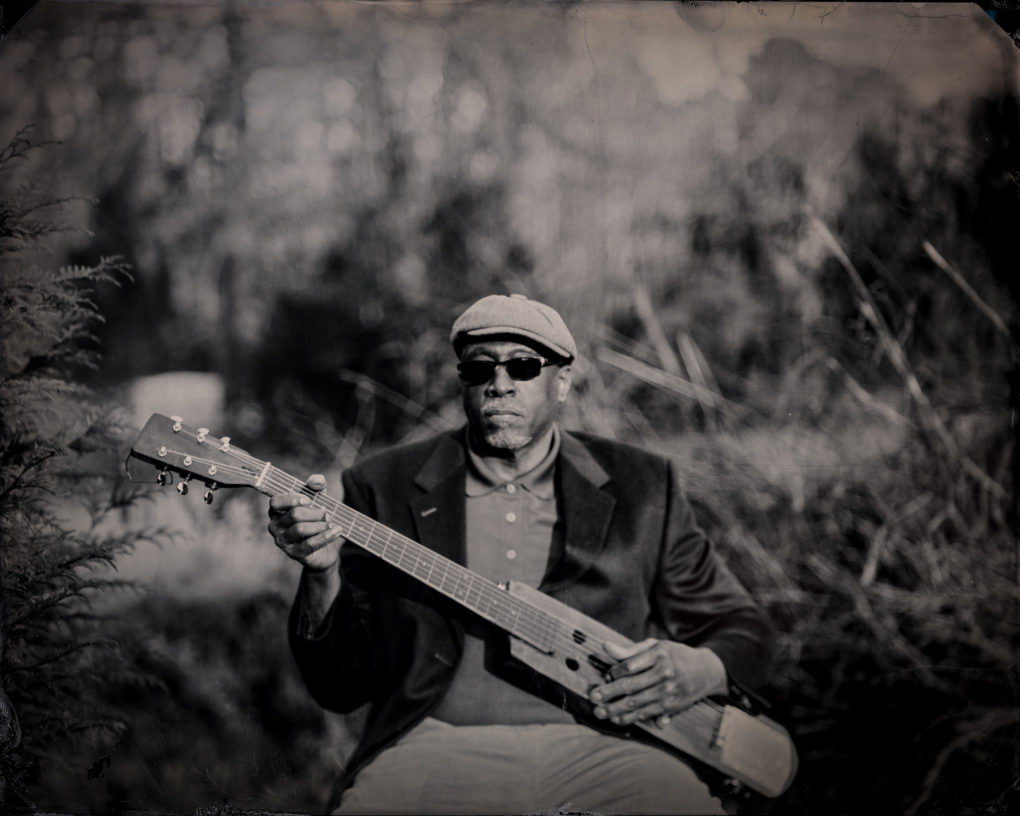 You’re still a relatively young man compared to me. I just turned 75 and I’m recovering from cancer. That’s why I’m wearing this scarf on my neck. To cover up the surgery scars.

I’m just joining that club. I just got diagnosed with that prostate, you know,

Oh crap. I’m so sorry to hear that. That’s usually fairly easy to beat if you catch it early, so I’m hoping…

That’s what I’m hoping too. You never know what’s gonna happen to you. Life always throws something at you.

Yes it does. That’s why I’m collecting my best music articles for a book, so I can leave  some kind of legacy. Which you’ve already done, building on your first release with your fine new album.

Thank you. I like it too. There’s something on there for everybody. And being with Music Maker gives me confidence. I could probably put out my own CD, but never with all the artwork they do. It also sounds good when people hear it, and it’s nice to have that support behind me. Music Maker is a big name, so I can walk anywhere with a name that’s known worldwide.

Indeed you can. Well, thanks, Shelton. It was really fun talking to you today.

I’m hoping for the best for both of us. I’m gonna send you positive energy and you send it to me.

Listen to the Album