The book was a graduation gift from a fan of my blues radio show on WVKR, the student radio station at Vassar College in Poughkeepsie, New York, and it changed my life.

“Music Makers: Portraits & Songs From the Roots of America” was filled with the black and white photography and stories of Music Maker co-founder Tim Duffy, and it totally captivated me. B.B. King had written the foreword. The work of the artists it portrayed had formed the living roots of American culture. Having written my undergrad thesis on blues music as related to Jim Crow politics and sharecropping economics, and the standard histories left me believing that there wasn’t much left to study after the 1970s. So, it shocked me that an organization like Music Maker existed. I had thought such artists were figures from the past, but here they were, still keeping the tradition alive in their own communities in a new millennium.

Little did I know it was possible to meet these artists, to talk to them, to reach across the cultural barriers between a kid from Massachusetts and Southern artists whose work felt essential to who I was becoming — and fundamental to American culture.

Today, I still live in the world of Music Maker, and I have for 15 years, as a donor, doing publicity work, social media marketing, serving as a board member, putting on benefit concerts, visiting Boo Hanks at his home twice, coming to the 20th anniversary homecoming and the Lincoln Center revue, writing for the blog, and half a lifetime of listening.

And none of it would have happened if not for a 2006 road trip.

“The Three Musketeers of Music Maker”

My banjo-playing friend Gregory Mulkern (one of those people who inspire envy with their ability to pick up any instrument and make it sound good) and I road-tripped in my dad’s black Volvo station wagon to North Carolina that year to visit our friend Kate, who had moved there to study nursing. Our plan was to hike and camp, eat some barbecue, and — I hoped — meet some of the Music Maker blues musicians in person.

I had emailed Tim and Denise Duffy, Music Maker’s co-founders, and had arranged for a one-hour visit with them in Hillsborough.

I got more than I bargained for. Gregory and I wound up spending the entire afternoon with the Duffys. I remember us sitting at the backyard picnic table and walking along a creek at the back of the property. Denise, Tim, Greg and I talked blues music and Tim’s journey playing with Guitar Gabriel and meeting and partnering with blues musicians. He taught us a couple of what he called “secret” chords, chords that you only find deep in the blues culture that he used to build trust with these musicians. I left having bought a bunch of CDs, and Denise tossed in a few more at no charge because she thought I just had to hear them.

Tim and Denise seemed like a real-life cross between field recording legend Alan Lomax and Habitat for Humanity founders Millard and Linda Fuller — and Tim was writing down directions and circling roads on my atlas so we could visit Captain Luke, Macavine Hayes, and Whistlin’ Britches, whom they referred to fondly as the Three Musketeers. Later that day, we all went to see John Dee Holeman play an amazing outdoor show, and I got his autograph. But this was all just the prologue to the truly life-changing experience.

My friend Kate, Gregory, and I drove out to Winston-Salem a couple days later. We had a map, phone numbers (but no cell phones back then), and the name of a solid soul-food buffet. I’d never been to Winston before, and I nervously knocked on the door of the address we were given. Captain Luke answered, smoking a flavored cigar, and he talked with us for a bit, then said he wanted us to follow him. Luke drove a big American sedan with a Music Maker bumper sticker. He picked up Whistlin’ Britches and Macavine Hayes, and we took them all out to lunch. Honestly, I think all of us felt a little awkward as we ate. We were still trying to cross the cultural barriers between us. But the genuine connections happened that afternoon inside a little drink house (the North Carolina term for a juke joint) called Queenie’s. 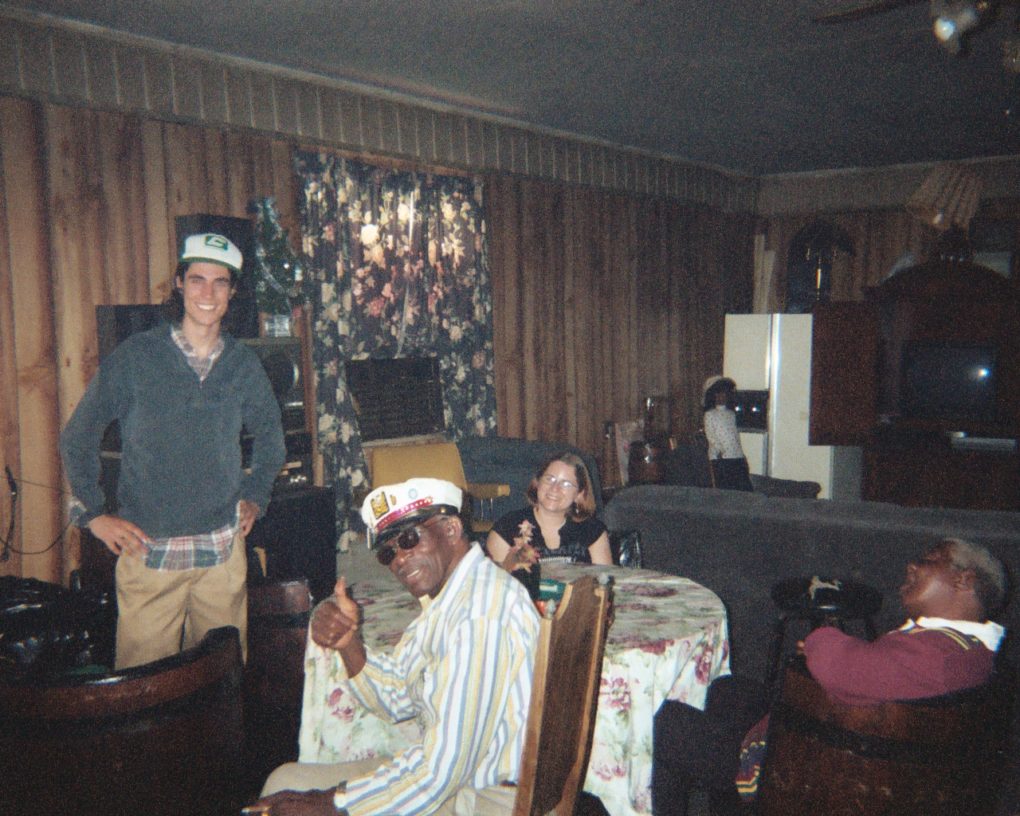 Queenie’s’ was in no way a proper bar. It was in a wood-paneled garage, and we had to park on the lawn outside. Circular tables were surrounded with chairs made from barrels. The proprietor, a friendly woman, offered us cans of beer or corn liquor served in Mason jars. I didn’t realize that “corn” meant bootleg liquor, but I was more than game to try it. Captain Luke explained you wanted water with your corn liquor, so we got waters to go with them. We weren’t sure if Luke meant to mix the water or use it as a chaser. He told us, “You know how when you drink whiskey, the next day it taste like”—here he licked his lips like he had a bad taste in his mouth—“well, when you drink corn liquor, the next day, mmm, taste like corn on the cob!”

Someone put a CD on: Albert King. We talked about our favorite blues musicians for a bit and played a little music together. Luke sang in his incredibly deep bass voice.

We loosened up and started joking around with one another, having fun, laughing. These musicians’ openness struck me deeply. Luke told us stories about working in a junkyard and his days running moonshine. The charismatic and philosophical Whistlin’ Britches was so willing to talk about the struggles and joys of his life; I really felt an affinity for him.

And I bought a couple of Mason jars of that corn liquor to take home to NYC on my way out.

Kate says, “I remember how welcoming and kind everyone was — eager to share their music and culture with us. It was beautiful.”

“They were really ambassadors, bringing people into their community. They had an openness about them. You were crossing those invisible lines that in America we are trained not to cross.” Music Maker co-founder Denise Duffy, speaking of Captain Luke and Macavine Hayes

It was beautiful to me, too. There I was, a young man who grew up 1,000 miles away, fascinated with the blues, and I had just spent an entire day being welcomed into blues culture by the very people who had formed it and were still keeping it alive.

“I remember Captain Luke calling up and saying he had a good time,” Music Maker co-founder Tim Duffy told me not long ago.

Co-founder Denise Duffy put it another way. “They were really ambassadors, bringing people into their community,” she told me. “They had an openness about them. You were crossing those invisible lines that in America we are trained not to cross.”

“Anyone that goes out in America looking for something, you find something that you can’t find in books,” Tim added. “Captain Luke and Macavine are true partner artists. It’s more about the personality than where they put the fingers on the guitar. It’s about what they lived. You drive to these Southern towns, you don’t think much is there. But if you have an in, someone who lives there, you experience it in a different way.”

I certainly know that on that day 15 years ago, I experienced the culture of the South and of the blues differently than I ever had. I had heard it on CDs and albums, seen it played in performing arts centers. But to see it in its community of origin is an entirely different thing, an incalculably richer experience. That day changed my life, and I will be forever grateful.